Code 39 is a common barcode type used for various labels such as name badges, inventory and industrial applications. The symbology of the Code 39 character set consists of barcode symbols representing numbers 0-9, upper-case letters A-Z, the space character and the following symbols: – . $ / + %. Lower-case characters may also be easily encoded with the extended fonts provided in the IDAutomation Code-39 Font Package.

The Code 39 barcode is the easiest of the alpha-numeric barcodes to use and is designed for character self-checking, thus eliminating the need for check character calculations. Code 39 is also known as the 3 of 9 Barcode, Code 3 of 9 and Barcode39. Several standards exist that dictate how Code 39 barcodes should be printed for certain implementations. Although a checksum character is optional, many standards require it. The checksum character is a type of MOD43 calculation provided in many of the IDAutomation font encoders for the Code 39 Barcode Fonts. Enabling the check digit is also an option within IDAutomation Barcode Components and Applications that allow the component to automatically generate and include the MOD43 checksum without fonts.

The following standards based on the 3 of 9 barcode require MOD43 check digits:

The complete Code 39 barcode consists of a start character, data digits, an optional check character and a stop character.

Printing of the Code 39 barcode as a font is an easy process if checksum characters are not required for the implementation. If the checksum is needed, IDAutomation provides several Font Encoders, Components and Applications for this purpose.

IDAutomation Code 39 Barcode Fonts may be created directly from the keyboard or used in a calculated field to dynamically produce multiple symbols in many applications, including Microsoft Word, Excel, FileMaker, QuickBooksand OpenOffice.

To create a 3 of 9 barcode manually that encodes the data “BAR CODE-39”, the following may be performed:

When the IDAutomation Code 39 Barcode Font is used, the parenthesis may be used as the start and stop characters to keep the asterisks from appearing in the text interpretation. For example, (BAR_CODE-39).

2014 Update: IDAutomation now provides Symbol Encoded Fonts that encode the space character without a substitution character; available in the latest version of the IDAutomation Code 39 Fonts. After installation, these fonts are identified by the “Y” character in the font name, for example, IDAutomationYHC39S.

Code 39 Barcodes may be dynamically created from a calculated field in a text box by using a formula that appends the start and stop characters. This is possible in several applications including the following:

MOD43 check characters may be verified with the free Barcode Data Decoder App, which scans the barcode and highlights the check digit in green when the calculation is correct. 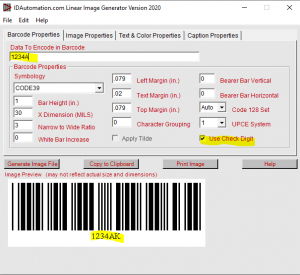 The manual calculations described below are rarely necessary. IDAutomation provides several barcode font tools, plug-ins and source code samples that are free to use with IDAutomation fonts, which automatically format the start, stop and check characters to the barcode fonts. Additionally, the check digit option in all Components and Applications calculate and include the checksum automatically.

For example, perform the following calculations to determine the check character using the data characters “CODE39”:

Within the IDAutomation Code-39 Font Package, extended fonts are provided to easily encode lower-case characters in addition to upper-case letters and numbers. When these fonts are not being used, or when it is necessary to encode additional characters, shift functions may be used to extend the character set according to ISO 646. In order for Extended Code 39 to be decoded properly, the scanner must first be programmed to read it. Otherwise, the scanner will simply scan the existing data, for example, “+C” instead of “c.”

When extended Code 39 is enabled, functions may be directly encoded by using the format $? to specify the function where ? equals the character that represents the appropriate function in the chart below. For example, Code$I3of9$M will encode Code[TAB]3of9[RETURN].

Note:
A space symbol cannot usually be represented from a font with an actual space (ASCII 32). To overcome this issue with Code 39 Fonts: