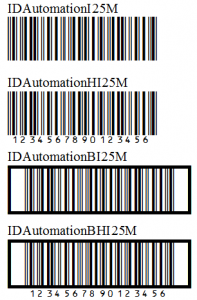 Interleaved 2 of 5 (ITF) is a numeric only barcode used to encode pairs of numbers into a self-checking, high-density barcode format. In this symbology, every two digits are interleaved with each other to create a single symbol. If a number string containing an odd number of digits needs to be encoded, a leading zero must be added to produce an even number of digits in the Interleaved 2 of 5 barcode. In many cases, the Code 128 barcode offers an advantage over the ITF barcode because it encodes even and odd numbers of digits, as well as letters and symbols, with nearly equal density.

The IDAutomation Interleaved 2 of 5 Barcode Font Package provides 4 different font formats (as shown in the graphic to the right) to meet various requirements. These formats are, in the order they appear:

ITF-14 is the GS1 System’s only use of Interleaved 2 of 5 and it is only used to encode the GTIN as a 14 digit number. It is commonly used on shipping boxes and containers.

Bar Height:
The minimum recommended bar height for an ITF-14 Barcode is 32mm (1.25″) when used in General Distribution Scanning environments (automated scanning). For all other scanning applications, the height should be as high as possible. In no case shall the bar height be less than 13mm (.5″). While 13mm (.5″) is the minimum height for barcodes not being scanned in an automated scanning environment, every effort should be made to increase the bar height to 32mm (1.25″) as possible.

Bar Width Ratio (N Dimension):
Bar width ratio (also known as the Narrow to Wide ratio or the N Dimension) is the difference of bar widths between the wide bars and the narrow bars in an ITF-14 Barcode. The acceptable range is 2.25:1 to 3:1. The IDAutomation Interleaved 2 of 5 Barcode Fonts have an N dimension of 2.75:1.

When using the IDAutomation Interleaved 2 of 5 Barcode Fonts, the following chart provides the recommended font name and size to use.

The purpose of “Bearer Bars” and the checksum is to reduce the possibility of misreads or short scans that may occur when a skewed scanning beam enters or exits the barcode symbol through its top or bottom edge. Bearer Bars should be a constant minimum thickness of twice the width of the narrow bar, placed directly against the top and bottom of the symbol bars. The bearer bars should completely surround the symbol, including the Quiet Zones, which are a minimum of 10 times the X dimension, which is the width of the narrow bar of the barcode. Many mandates for i2of5 require Bearer Bars and a MOD 10 Checksum. Some specifications state that only horizontal bearer bars along the top and bottom are necessary, however, it is better to use bearer bars that completely surround the barcode because it meets or exceeds any bearer bar requirement.

The IDAutomation Universal Barcode Font is a unique product that excels at generating ITF barcodes on multiple operating systems and locales, including Double Byte versions of Windows. This product overcomes the obstacles that sometimes occur when printing the Interleaved 2of5 barcode font outside of the USA. It also provides three different narrow to wide ratios: 2, 2.5 and 3.

The most common method of reading barcodes is with a barcode scanner. Most of the barcode scanners recommended by IDAutomation perform keyboard emulation and receive power from the USB port, so that no external power supply is required. When a barcode is scanned using keyboard emulation, the data scanned appears at the cursor as if it had been typed in from the keyboard.

Most barcode scanners have the ability to read ITF barcodes by default, such as the IDAutomation USB Barcode Scanner. This scanner dependably reads the IDAutomation Universal Barcode Font when printed as small as 6 points, which is an X dimension of 4 mils.

The character set referenced here is unique to the IDAutomation Interleaved 2 of 5 Barcode Font. IDAutomation provides several font encoders, macros and source code samples that may be used royalty-free with this font to automatically format the data being encoded to the barcode fonts. Therefore, references to this character set may not be necessary.

To manually create a barcode encoding the number 772233 with the chart below, use the following process:

The “ITF Code” column lists the character that the scanner will read for the associated symbol. The columns ASCII, Char and Unicode designate the location in either ASCII or Unicode where the barcode symbol for the character resides in the barcode fonts. When the Latin-1 codepage is not being used, it is suggested to use the Universal Barcode Font Advantage, which creates the ITF barcode as a font in any codepage and operating system in the same way.

MOD10 check digits may be verified with the free Barcode Data Decoder App, which scans the barcode and highlights the check digit in green when the calculation is correct.

IDAutomation provides several font encoders, plug-ins and source code that are free to use with IDAutomation barcode fonts, which will automatically format the start, stop and check characters to the barcode fonts. Therefore, manual calculations are rarely necessary.

The standard method of obtaining the check character (referred to as USS Interleaved 2 of 5 MOD 10) is obtained by performing the following calculation:

The following examples create a barcode with IDAutomation Interleaved 2 of 5 Barcode Fonts in the Latin-1 codepage, which is the default setting in the USA. When the Latin-1 codepage is not being used, or when using a Mac, it is suggested to use the Universal Barcode Font, which creates ITF and many other barcode types from a single font in any codepage and operating system.