In 2012, GS1 QR-Code became a ratified standard for use within the GS1 System, primarily for sharing extended packaging information associated with a product GTIN. GS1 also supports the encoding of multiple AIs within QR-Code symbols as the FNC1 character. For consumer goods, GS1 recommends using either GS1-DataMatrix or GS1 QR-Code when brand owners want to encode a link to a website. When either barcode is scanned by a consumer, the same information should be transmitted regardless of the symbology used.

If the desired product does not yet support GS1 QR-Code, GS1 DataMatrix may be another option since either GS1-DataMatrix or GS1 QR-Code may be used according to GS1 documentation.

Generating and Encoding the FNC1

When GS1 QR-Code is used for sharing extended packaging information, as in Fig. 2 below, Application Identifiers AI (01) and AI (8200) are mandatory and other GS1 AIs are optional.

There are two methods of encoding FNC1 characters within QR-Codes and these are referred to as first position (GS1) and second position (AIM):

When generating AIM QR-Code symbols, the first AI is required directly after the ~2 in parentheses. The parentheses will not be encoded and are only used to encode the first AI within the symbol. If additional FNC1s need to be encoded, they should be encoded as ~2 in any mode. In addition, to comply with AIM QR specifications, the character GS (encoded as ~d029) in byte mode or the % character in alphanumeric mode may also be used.

According to GS1 specifications, when GS1 emulation is enabled, the first FNC1 character should be decoded as “]Q3” when it is a GS1 symbol or “]Q5” when it is an AIM symbol and any additional FNC1 characters should be decoded as <GS> (ASCII 29). The first 3 characters of this decoded symbol are referred to as the AIM symbology identifier. Not all scanners properly decode symbology identifiers or FNC1 characters. The <GS> character is not visible when scanned unless used with an advanced verifier or the IDAutomation Scanner ASCII String Decoder. The screenshot below is the decoded symbol of Fig. 1 above, scanned with the IDAutomation 2D USB Scanner. 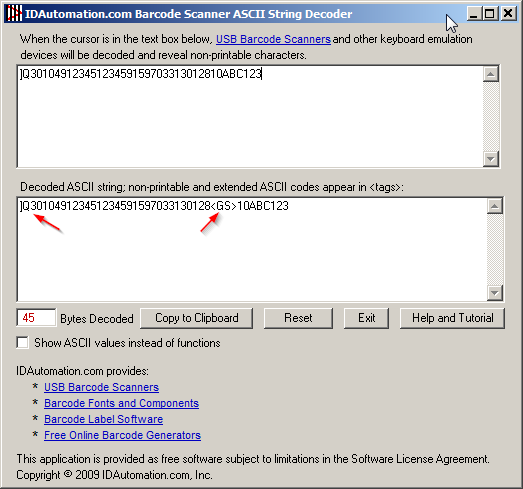 QR-Code barcode symbols may be easily verified with the Barcode Data Decoder Verifier App, which may be used to verify encoded data and parse out the GS1 Application Identifiers. The screenshot below is the result from scanning Fig 1 above.