UTF-8 is a variable length method of encoding Unicode characters such as Chinese, Japanese, Kanji, Arabic, Russian or Thai characters for example. Any character in the Unicode standard can be encoded in UTF-8. The first 128 characters (US-ASCII) use only one byte and do not require conversion. To properly encode characters above U+007F two or more bytes are necessary. To encode these characters in 2D barcodes such as PDF417, Data Matrix and QR Code, the data must first be converted to a string of bytes in little-endian mode without the byte order mark (BOM). In addition, the decoder must be able to properly decode the data. This conversion should take place before encoding the bytes into the barcode. If it is possible to encode ASCII characters instead of UTF-8 it is recommended.

IDAutomation offers a built-in UTF-8 conversion to byte method for the encoding of Unicode characters above U+007F in 2D barcodes such as PDF417, Data Matrix, and QR Code. Any UTF-8 character in the Unicode range (0-65535) can be encoded using this method.

This built-in method of conversion is available for Data Matrix & QR-Code (Refer to the bottom of the page for PDF417) in the 2021 or later versions of the following products:

UTF8 is also supported in the following 2D Font Packages:

IDAutomation currently offers these products by request for all Developer Licenses and above with an active Level 2 Support and Upgrade Subscription. IDAutomation can also provide source code by request of any developer license purchase so this conversion method can be performed outside of the barcode generation component. This built-in method converts the text string into a sequence of bytes (using 1 byte for the range [0-127], 2 bytes for the range [128-2047] and 3 bytes for the range [2047-65535] and arranges the byte sequence into a new string in little-endian mode without BOM. This is the format most scanners and decoders use.

Most USB barcode scanners cannot properly decode barcodes that include UTF-8 or Unicode. The following barcode decoder apps have been tested and are known to properly decode UTF-8: 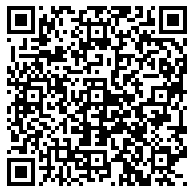 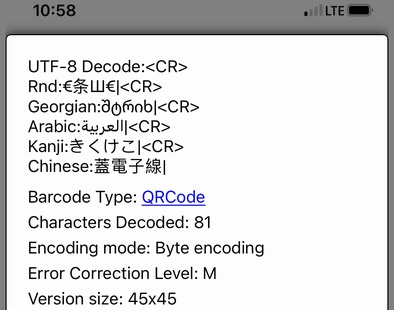