Unicode Image refers to a patented process that generates a native barcode image from a mono-spaced Unicode font such as Courier New. IDAutomation has been utilizing this technology since 2006 and licensing of this technology is available by request.

Products using this technology are usually referred to as “Native Generators” because of their ability to generate symbols without the need to install a barcode font.

Several products make use of this technology, including:

A sizing issue may occur when using Unicode Image products with 2D barcodes. The font “Courier New” tends to create a wider 2D symbol and “Consolas” tends to create a taller symbol in 2D Matrix barcode types. In some applications, such as Crystal Reports, a taller symbol can be shortened by changing the line spacing. For example, if “Consolas” is creating a symbol that is too tall, set the line spacing under the Paragraph tab to .95 or another size that creates a square symbol. 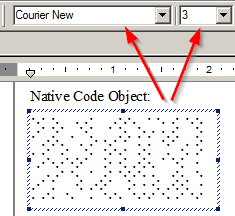 The IDAutomation2D S font at 6 points: 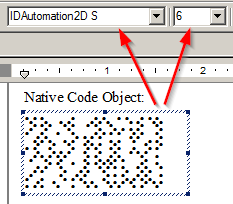