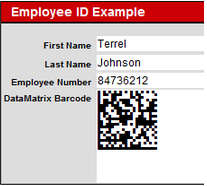 August saw the release of IDAutomations’ highly-anticipated FileMaker Pro Plugin, a new font encoder tool that allows barcode generation from fonts in FileMaker. This powerful encoder is included in the Font and Encoder packages for Data Matrix and PDF417 and will soon be included in the font packages for QR Code as well. Initially updated for support on Windows operating systems, this most recent update makes it compatible with Mac systems for the first time.

Barcode fonts can be very easy to generate, but it is important to understand that barcode fonts do not operate in the same way that standard typeface fonts do. Since barcodes represent data that can be decoded and output when read with a barcode scanner, this means that the data must originally be turned into that barcode. This is accomplished through the use of a font encoder tool like the FileMaker Pro Plugin, which formats the data you want to encode into a special text string that will display an accurate barcode when the actual font is applied to it.

Update: Check out our newest video tutorial about how to create 2D barcodes in FileMaker using fonts.